I have not traveled much of the world, as you will see in my profile, but I have traveled a lot in Argentina , which according to the saying has all the types of climates and landscapes in the world. And one of the places that has impacted me the most so far is the  José Ormachea de Sarmiento Petrified Forest , which is located in the province of  Chubut  in  Argentina .

To give you an idea, do not think of a pile of standing trees that are made of stone, but a desert region, beautiful, similar to a lunar or Martian landscape, where one can see on the ground, thousands of petrified logs.

When you start the trail you see a few, and you are desperate to take pictures, but around a bend you see one of the most beautiful landscapes I have seen, and literally hundreds of petrified logs everywhere.

They can all be seen in a green earth stratum (gecko formation) that is about 65 million years old. At that time the region was an immense and very dense forest. It was located near what was the coast of the sea, in those days, although now it is in the middle of Patagonia . 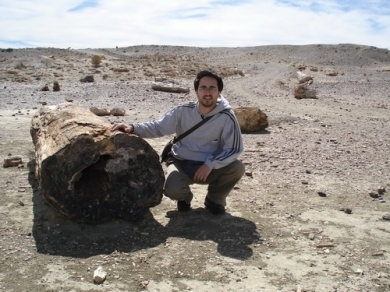 As the park ranger told me, I recommend talking with them, since they love to tell tourists all the details. If you give him lyrics, he can talk for hours. What he told me is that there the sea was gaining ground when its level increased, and it covered the entire forest, which, as it was also covered by the seabed, became fossilized. And millions of years later the wind, which is very strong there, was piercing the earth and leaving the forest in sight again.

The  José Ormachea Park  is located more than 1800 kilometers from  Buenos Aires . To be able to visit it, the best thing is to go to  Comodoro Rivadavia , from where there are excursions that last all day, or else you can rent a car or go by bus to the town of  Sarmiento , which is the closest to the park.

El Bosque is located 165 kilometers from  Comodoro Rivadavia  along Provincial Route 26, and only 25 kilometers from  Sarmiento . That is why it is advisable to go first to  Comodoro , and then to  Sarmiento , where you can sleep in cheap hotels, and where there are very good places to eat while spending very little money. Right there there is an interesting museum to visit, and some other excursions, but the main one is the  Petrified Forest

Don Det and the 4,000 thousand islands