The best attraction in the town of San Pedro de Mala: its food

The town of San Pedro de Mala is one of the towns south of Lima that is surrounded by peaceful beaches that are its main center of attraction.

Every time I go to that town, what makes me adore it is its tranquility and its food. You cannot eat better than in mala, where the official dish is prepared, which is the carapulcra with the dry soup.

These dishes seem to come from ancient times, especially the carapulcra, because to prepare it you must get the dried potato, but not just any, since there are different ones. You need the yellow dried potato variety that has a different taste from the dry potato from the coast and even from regions south of Mala. 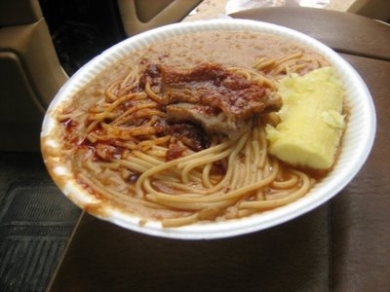 The preparation is arduous since you have to move and move so that it does not stick. It is made in pailas or large pots and with firewood, which gives the special flavor to that food, which among other things includes medium hot red pepper, amni, dried potato and other condiments.

As you can see in the image, it is accompanied by cassava and can be made from pork, chicken, or beef, although it is normal for it to be prepared with all three types of meat in the same cooking.

The dry soup, as its name indicates, is a kind of red noodle, but not tomato-based, but with panca or red chili, characteristic of Peru and in general of all Peruvian foods, with a slight touch of spice.

The taste of the food in Mala is uniform and unique, since I tried this dish in different places and it has a special flavor that differentiates it from other regions. If you go for Mala, you can’t miss out on their food.