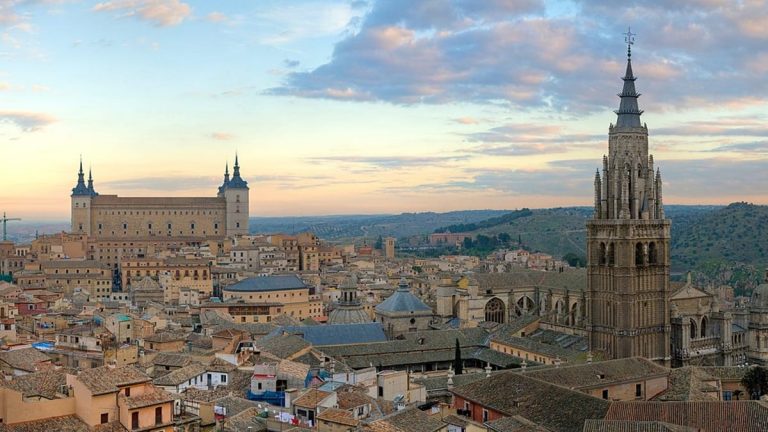 Curiously, although I am from Madrid, I had not seen Toledo in depth, only a few visits with my family when I was little.

40 minutes from Madrid is a great visit to a monumental city.

Toledo is a city located in the center of Spain, capital of the homonymous province and of the autonomous community of Castilla-La Mancha.

Toledo is known as the city of three cultures after having been inhabited for centuries by Christian Jews and Arabs and “The Imperial City” for having been the seat of the court of Carlos I of Spain in the Hispanic kingdoms.

The city is located on the right bank of the Tagus on a hill one hundred meters above the river that surrounds its baforming a closed curve known as Torno del Tajo. It has a dispersion of configuration with the neighborhoods widely separated from the nucleus: the sugar on the right bank of the river that has its origin in an old neighborhood of the city is located about 7 kilometers from the city center while the Santa María de Benquerencia It is practically opposite the old one on the left bank of the Tagus its center located about 8 km from the city.

The city of Toledo was declared a Historic-Artistic Site in 1940, UNESCO later received the title of World Heritage Site in 1987.

To commemorate the fourth centenary of the publication of the first part of Don Quixote (El Ingenioso Hidalgo Don Quijote de la Mancha) the Junta de Communities de Castilla La Mancha designed a series of routes through the region crossing the various points of the novel is cited. It is known as the Don Quixote Route and two of the design routes sections 1 and 8 are based in Toledo: those that link the city with Castilla La Mancha and the Montes de Toledo, taking advantage of the natural route that crosses the Cigarrales and leads to Cobisa Nambroca Burguillos de Toledo where it takes the Camino Real de Sevilla in turn suddenly towards Mascaraque Almonacid de Toledo in the background in its surroundings near Mora in La Mancha.