In a Cafe on Corrientes Avenue

A fan of Fito Páez’s Music, I never thought that the phrase “In a cafe they met by chance…” could be a real experience for me.

It was March 28, 2005 and he had arrived in the city of Buenos Aires at 5 in the afternoon. When I got to the hotel, the first thing I did was change to go for a walk along Corrientes Avenue that I had heard so much about.

I got cold and that’s why I decided to go back to the hotel to put something on and on the way I met a lady and her daughter whom I had met on the flight and who were also staying at the same hotel as me, so they waited for me and we We went to dinner.

Unfortunately that day, the rain was hellish and the steakhouse where we were was flooded by water, something to which I was not used to because in Lima, my city, it never rains.

When I left the restaurant, I crossed the street on Corrientes Avenue and walked very slowly, still not believing that I was in that city. Back at the hotel, when passing by a cafe, I realized that there was someone I knew, and I kept thinking, worse I went back to know who it was because it had seemed familiar to me.

It was about Cecilia Roth, an actress whom I have followed for her films since 1999, when I saw her in the movie Martín Hache.

She kindly agreed to have a photo taken and here is the testimony of that night. 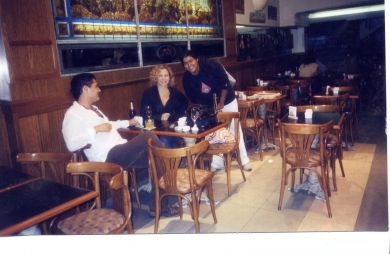 Moral: Buenos Aires cafes can give you many surprises.